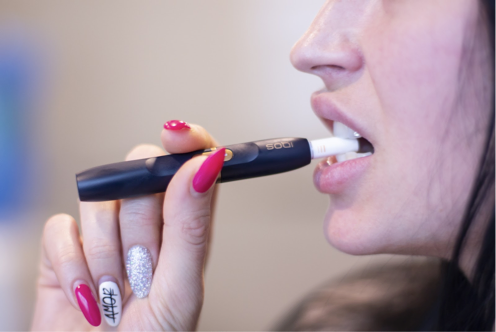 Have any of your patients mentioned that they now use an IQOS device? Have they asked you, as their doctor, whether this is a good idea?

The IQOS (pronounced EYE-kose) website states they offer a “choice of better alternatives to smoking”. They refer to two different solutions to moving away from cigarettes; one that heats tobacco (IQOS devices) and one that heats liquid (e-cigarettes). They claim that both products are better alternatives than continuing to smoke cigarettes. IQOS stands for “I quit original smoking” and is interestingly made by the manufacturer of Marlboro cigarettes.

IQOS are battery-operated devices which hold a ‘heat stick’ (looks like a cigarette) which contains a tobacco plug. The heat produced by the device produces a nicotine-rich vapour rather than a harmful smoke which is produced by traditional cigarettes when tobacco is burned. The devices are now available in the UK and are becoming increasingly popular.

However, research now suggests that this new “heat not burn” smokeless cigarette technology is perhaps not as harmless as the company claim. Philip Morris International (PMI), the company behind IQOS and the biggest tobacco company in the world, says its future is smoke-free and is investing in ‘heating’ tobacco products, which they argue are safer alternatives to smoking. Yet, there remains a concern surrounding tobacco companies attempting to overcome government regulations by claiming they have reduced the resultant harm associated with use of their products in an attempt to reframe the industry as part of the solution rather than the problem.

How are IQOS devices different to e-cigarettes?

IQOS devices are different to e-cigarettes because they contain tobacco rather than the flavoured e-liquid usually found in e-cigarettes. The idea being that IQOS allows users to maintain the look, feel and taste of smoking a regular cigarette without inhaling burned tobacco and the associated cancer-causing toxicants.

Are heated tobacco products proven to be safer than cigarettes?

PMI claim their ‘heat not burn’ product is safer than smoking cigarettes because when tobacco burns it produces over 7,000 chemicals within cigarette smoke which are not all present when the tobacco is only heated. Amongst these 7,000 chemicals, at least 70 are known to cause cancer. Tobacco that is not burned, only heated, is called ‘smokeless tobacco’ which indeed contains fewer cancer-causing chemicals, such as acrolein and formaldehyde, yet there remains at least 30 known cancer-causing toxicants in smokeless tobacco, including nicotine.

IQOS devices also remain highly addictive. Although it is vitally important to reduce exposure to the harmful byproducts of smoking, it is also important to remember that nicotine is an addictive drug, and is not without its own risks. Nicotine is a stimulant which affects the brain as well as the cardiovascular system.

Furthermore, despite PMI’s claim that IQOS is less toxic than traditional cigarettes, numerous articles in an issue of the Journal of Tobacco Control concluded different findings to that of the manufacturer. For example, it has been found that IQOS users, on average, increase the rate at which they inhale nicotine, due to an awareness that the heat stick only lasts for 6 minutes at which point the device shuts down and requires recharging. On one hand, this mechanism has the potential to limit the frequency an individual smokes, but also has the dangerous potential to increase the amount of vapour the individual inhales per smoke.

Moreover, despite the IQOS device not producing a flame, it has been found that the tobacco plug within the device is often charred as a result of thermal decomposition. In light of this finding, it appears IQOS is not strictly a ‘heat not burn’ tobacco device as the manufacturer claims. Consequently, this implies the devices may not be as harm-free as also claimed, as this charring can result in some of the cancer-causing chemicals initially thought not to be inhaled through the IQOS device to be present when the tobacco plug burns.

While IQOS is an electronic device, the Food and Drug Administration (FDA) in the US has classified it as a cigarette and consequently, the device is subject to all of the same restrictions as traditional cigarettes. Although the FDA permits IQOS devices to be sold in the US, they have not yet decided whether the product can be marketed as less harmful than other tobacco products.

It is possible that IQOS devices may help adults to quit smoking. However, the consensus seems to be that if e-cigarettes did not exist, and IQOS devices were the first product to come to market, this would be a step forward. However, we already have e-cigarettes, a no-tobacco product designed to do the same thing. Although e-cigarettes have their own risks, including links to respiratory disease and unknown long-term effects, they have a ‘safety-edge’ to IQOS as they do not contain tobacco. So despite IQOS theoretically being a positive for public health if it helps smokers to quit outright, it could do damage if it entices current or former smokers away from e-cigarettes and back to tobacco.

Is there a concern for the youth?

There is a concern that the ‘sleek and high-tech’ devices may appeal to non-smoking youths. E-cigarette use has surged among youths, many of whom never smoked cigarettes, with a 78% increase in e-cigarette use among high schoolers in the US from 2017 to 2018. The FDA are placing strict restrictions on how these products are marketed for this reason. However, IQOS is expected to be less popular amongst youths as they do not (yet) come in fruity or sweet flavours like e-cigarettes do, and are more pricey.

This article aimed to raise awareness amongst healthcare professionals of a rising trend. If one of your patients ask your advice about using IQOS devices, it appears that the use of the products is a step in the right direction for current smokers of traditional cigarettes as they contain fewer cancer-causing toxicants. However, for current e-cigarette users or non-smokers, the use of IQOS should not be recommended.

In short, those who currently do not smoke tobacco, should continue not to do so.