Pride matters – even in cancer 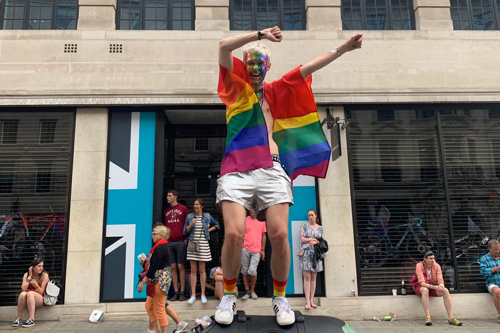 Current evidence suggests that cancer screening coverage is lower in lesbian, gay, bisexual and transgender (LGBT) communities. Moreover, one study reported that 14% of LGBT people, including 37% of transgender people, have avoided healthcare services (including screening) due to a fear of being discriminated against. While the National LGBT Survey found that 16% of respondents who had accessed or attempted to access public health services had had a negative experience based on their sexual orientation. The impact that this must have on these individuals’ health is alarming.

Simply, pride matters for cancer because it is an opportunity to raise awareness of the associated inequities which exist among the LGBT community. This article will cover just a couple of factors of which there are, unfortunately, many more!

One of the main reasons lesbian and bisexual women should undergo screening is because of human papilloma virus (HPV). HPV is associated with over 95% of all cervical cases, but over 80% of the population will contract the virus at some point in their lifetime. There is a common misconception that it can only be passed on by penetrative sex. This is not true as it can also be spread by skin-to-skin contact in the genital area, sharing of sex toys and oral sex. Therefore it is imperative that we encourage all women, no matter their sexual orientation, to undergo cervical screening.

There remains limited evidence surrounding screening coverage among transgender men. Although small studies have found that approximately half of trans men had not had a cervical screening in the previous 3 years.

Lesbian and bisexual women are also under-represented in breast screening. A study reported that approximately 80% of heterosexual women aged over 40 years would go to their GP within a week of finding a lump, compared to 75% of lesbians and 68% of bisexual women. As 1 in 8 women will develop breast cancer at some point in their lifetime, it is crucial that we engage with these women to catch it as early as possible.

A prostate cancer diagnosis for gay or bisexual men or trans women brings with it a range of unique problems which many do not feel healthcare professionals are comfortable addressing. Members of the LGBT community often need support in dealing with the emotional and physical effects of prostate cancer and the associated treatment. For example, diagnosis and treatment may negatively impact their ability to express their sexuality, or they may benefit from support surrounding how to cope with the focus being on something so male when they identify as female. The impact of a prostate cancer diagnosis on any individual’s self-image and sexual relations is profound, but these may be heightened for trans women and gay and bisexual men.

LGBT-Walnut, a support group for those with a prostate cancer diagnosis who identify as gay, bisexual or as a trans woman, argue there is lacking dialogue between these individuals and healthcare professionals surrounding prostate cancer. They suggest that if healthcare settings invited their groups in to discuss the topic, a better understanding of their unique situation as gay men with prostate cancer may be achieved. It is highlighted that if doctors do not ask the correct questions because they do not consider their patients’ sexual status, these individuals are likely to only get half the answers they truly need.

The physical issues individuals face from prostate cancer treatment are the same for all men regardless of sexuality or gender identification; urinary incontinence, erectile dysfunction etc. However, due to the nature of sexual relationships between men and for trans women, these can become highly significant factors affecting these individuals’ self-image and masculinity. Whether the individual can remain an active sexual partner or a passive one can be a very important factor for many people. In turn, this often results in gay or bisexual men feeling pressurised and unable to discuss such topics. Moreover, this is an area many of these individuals feel uncomfortable raising with clinicians as they feel they do not understand. It is more often than not the case that doctors offer gay and bisexual men or trans women heteronormative versions of treatment and outcomes as opposed to the required tailored support and guidance.

It is clear that more support is urgently needed on cancer screening coverage in LGBT communities as well as the added and unique impact a cancer diagnosis can have on members of the LGBT community. The 2018 National LGBT Action Plan highlighted the need to put LGBT people’s needs ‘at the heart of the NHS’. It is vital that more is done to know exactly what these needs are to allow progress to be made.

There is a general view that clinicians do not have adequate knowledge surrounding cancer and the LBGT community. The advice from Public Health England is to take simple steps such as having LGBT posters or leaflets in waiting rooms and having staff wear rainbow lanyards or badges to make LGBT people feel more welcomed.

In conclusion, pride is a fantastic opportunity to grow acceptance and highlight all inequalities which still exist within the LGBTQ community, including surrounding cancer.