How do we get to 3 in 4 people being diagnosed early with cancer?

Last week, the C the Signs team were proud to present a poster about our progress at Cancer Research UK’s (CRUK) Fifth Biennial Early Diagnosis conference. The conference took place over three days and celebrated the research from the last decade, alongside the implementation of evidence into policy and practice. Another theme explored was the potential innovations that will enable CRUK’s ambition of 3 in 4 people surviving cancer by 2034 to reach fruition. This cancer survival ambition has been raised since the 2 in 4 aim within CRUK’s 2014 strategy was achieved. It was clear throughout the conference that early diagnosis will play a vital role in reaching this enhanced goal, explaining CRUK’s similar aim of 3 in 4 patients being diagnosed at stages I and II by 2034.

The focus on the early diagnosis of cancer gained speed in the early 2000s which has resulted in a significantly deeper understanding of the burden of late stage cancer and the opportunities and challenges of diagnosing cancer earlier. It is evident there are two main barriers to the success of 3 in 4 patients being diagnosed at stages I and II by 2034: the first being how patients can recognise the early symptoms of cancer and present to their GP early, and the second being how GPs can recognise these vague, early symptoms when they do present. Investment in targeted campaigns has encouraged the public to seek help for symptoms sooner and resulted in more patients being referred on a cancer pathway, but these often wax and wane in the public memory. While research within primary care has underpinned the development of guidance to support GPs, ensuring patients receive the appropriate care quickly and effectively remains a challenge. C the Signs clearly addresses this second issue; supporting and empowering GPs to appropriately refer patients at the initial signs of cancer. Our technology also aligns with the road map to increased access to direct-access diagnostic tests.

CRUK’s current priorities were made clear throughout the event, including:

Again, C the Signs enables and supports these priorities: encouraging the appropriate management and referral for all cancers, and recognising the often vague and non-specific symptoms of early cancer.

Throughout the three-day conference, as well as an array of fascinating and encouraging posters, there were many interesting presentations and debates. Just to mention a few, Dr Sarah Price explored the impact of changes in the NICE suspected-cancer referral guidelines on time to diagnosis, Cally Palmer CBE spoke about the NHS Long Term Plan for England and Dr Samantha Quaife gave a fascinating, and surprisingly reassuring presentation on the psychological and behavioural impact of lung cancer screening. It was particularly interesting to hear in Sara Hiom’s talk that several of the cancers shown to be lagging in terms of early diagnosis in the UK, such as lung and ovarian cancer, relate to the cancer pathways found to be most commonly accessed by GPs using C the Signs. 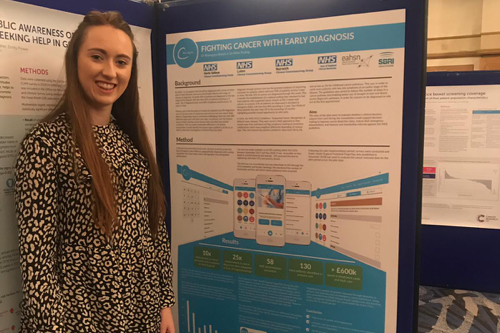 On a final note, in her keynote speech, Sara Hiom addressed the necessary changes in how we think about the cancer diagnosis goals. Within this speech Sara asked a question which remained in our conversations beyond the conference. We would like to end this summary of CRUK’s Early Diagnosis Research Conference by raising this question to yourselves: