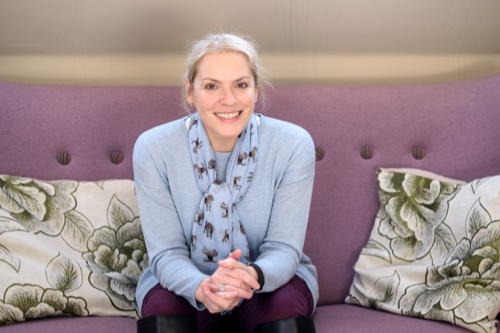 As a GP in the army, Amanda Sands understands that the odds of a young, non-smoking woman complaining of a persistent cough having lung cancer are small. But after being diagnosed with stage 4 lung cancer, she has joined Roy Castle Lung Cancer Foundation’s LikeMe campaign and is urging GPs to remember lung cancer can happen to anyone.

“It was back in the summer of 2017. I had a bit of a cough and also felt tight chested. Given the time of year, I just presumed it was pollen related. However, when my cough got worse and I started experiencing breathlessness, which is very unusual for me. I returned to my doctors and asked for a chest x-ray, and subsequent CT scan. It was then that I received my diagnosis – stage 4 lung cancer.

“I was shocked. My family and friends were shocked. My colleagues too. You just don’t think that you’re going to be a young, female non-smoker and get lung cancer.

“After learning more about my diagnosis, I found out I have got an anaplastic lymphoma kinase positive, or ALK+, rearrangement. No one know what has caused it except it’s due to some kind of genetic mutation and that it is on the rise within young female who don’t smoke.

“GP’s haven’t really heard of ALK+ positive lung cancer. None of my colleagues have heard of it. However, it accounts for around 3-5% of all lung cancers in the UK. That’s up to 2,300 people each year.”

Amanda shares her story as part of the LikeMe campaign, an awareness initiative launched by Roy Castle Lung Cancer Foundation which aims to challenge the misconceptions around the disease. Initially focusing on the stories of 10 women, all of whom were diagnosed under the age of 50, LikeMe provides a stark realisation that lung cancer really can affect anyone.

Survival rates for lung cancer have continued to lag significantly behind that of other causes, with just 10% of those diagnosed living for five years or more. This is largely because people are typically diagnosed at late stage when curative-intent treatment is no longer possible.

Early diagnosis of lung cancer is key. However, symptoms are, at best, vague – a persistent cough, breathlessness, weight loss and/or fatigue – or, at worst, non-existent. And when it comes to non-high risk individuals, the odds of an early diagnosis are even less; those under 50 are more likely to be diagnosed at late stage than those over 50.

This is why tools such as C the Signs are so important. We recognise the odds of someone like Amanda having lung cancer are low, but we know it is possible and need everyone else too as well. So, if the signs are pointing in that direction, we are urging GPs to follow them – regardless of the odds.

“As a GP we deal with coughs and upper respiratory tract infections a lot of the time. They’re bread and butter consultations,” Amanda continues. “But, I think it’s important to take time to listen to the story.

“If someone has got a cough for more than three weeks you need to be thinking what could be causing this and think about doing some kind of investigation, such as a chest x-ray. And likewise, if someone has got a wheeze and it doesn’t really fit in with their previous history, and they don’t have a history of any allergies, again you need to be thinking about doing some further investigations. You need to take people’s symptoms seriously and recognise that there could be something else going on.”